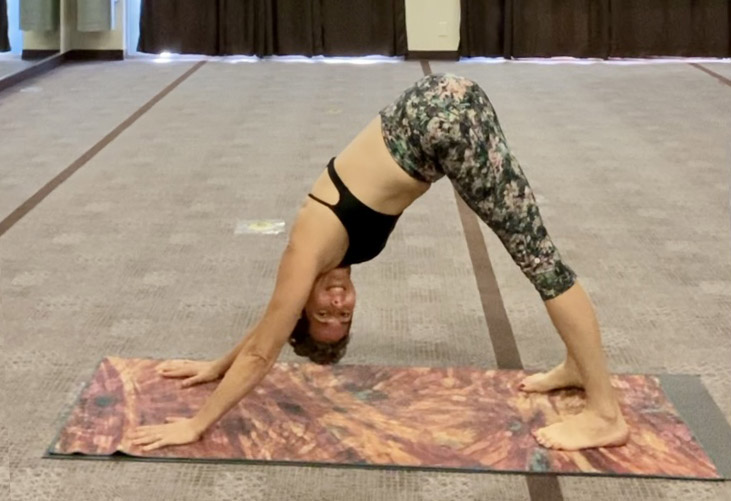 I am sure most of you know my story, and you also know when I tell a story, there is a back story.  So I will start with some back story….I will also say that it is relevant here to refer to Original Hot Yoga (OHY) as Bikram yoga as it relates to the early days of my practice….

I opened Hot Yoga Pasadena (originally Bikram Yoga Pasadena)  in Nov 1998.  I moved out here from LA after quitting my successful job at a corporate shoe company travelling to NYC 4 times a year and Vegas and this was quite the change.  Bikram Yoga had such a major impact on my body in reducing the symptoms of arthritis and back pain that I wanted to share this practice with as many people as I could.

A few months after opening my studio, in early 1999, some friends were taking an Astanga class in LA.  I became curious and tried it.  I loved it.  It was intense.  My teachers taught one student at a time and you had to be given permission for how far you could proceed in the series. It was completely different than Bikram yoga.  But it was a big secret!  I couldn’t tell my Bikram yoga friends or my yoga students.  I was still a very present senior teacher at Bikram teacher training and around headquarters. I basically hardly took a Bikram yoga class for the 6 serious years I practiced Astanga yoga.

If you were around in 2001 and 2003 when I went to India, then you may know this secret.  I was so into Astanga yoga that I travelled to India twice to study with the man who shared the series with the world, Shri  K Pattabhi Jois aka , Guruji (who was just the total opposite of Bikram in so many ways) and dug deep into Indian culture and the experience of spending 2 months my first trip and one month my second.  I also travelled around the US when Guruji visited including trips to Hawaii, San Diego and even NYC 10 days after 9-11.

So that is the first part of my big secret.

I was an avid practitioner of Astanga yoga for 6 years in the middle of owning my Bikram yoga studio.  It became quite challenging to drive into LA after getting married and spending so much time doing yoga and drinking smoothies with my Astanga yogi besties Kiki and Lisa E.  It was a magical time and I love that I had that experience.  When I became pregnant with Ruby in 2005, I no longer wanted to practice Astanga and did a 180 degree flip back to Bikram yoga where I have remained firmly devoted ever since.

The business of yoga

I hope you realize that even in the early 2000’s, it was becoming very clear to me that yoga was an exploding business.  By 2005, there were already corporations both creating and buying yoga studios that were pioneers in yoga (Yogaworks founded by the incredible Maty Ezraty)  to figure out how to change the more challenging aspects of Astanga and Bikram yoga to make them more appealing to the mass market.  There has also been an explosion of teacher trainings factories that pump out teachers at an alarming rate to fill all the corporate need for these new classes.  But I digress….

As much as I loved practicing Astanga Yoga, I 100% firmly believed in the life changing healing benefits of Bikram yoga and it’s accessibility to everyone willing to have the desire to transform how they live and feel.  I kept my studio 100% Bikram yoga 90 minute classes until the end of 2015 when I both wanted to divorce my relationship with Bikram and the chain around my neck of 90 minute classes.  As I evolved the studio with the input and support of Jeff, Brook, Roxanne and my other teachers, we took our time to make thoughtful decisions.  I still love the 60 minute version of OHY and I love that we added a fitness element with Hot Pilates and it’s low impact style that also creates massive results designed for everyone! I did find as I am getting older I needed to mix things up a bit without getting too far to what I found effective and in line with my core values.

Why has this taken Val so long to create?

The fact is that Vinyasa yoga is now everywhere, but what does that really mean?  Other than the definition of moving with breath, you have no idea what kind of class you are getting and let me tell you from the many classes I have tried, how creatively teachers can interpret the concept, even if it makes no sense.  I have found most of these classes mostly ineffective and not worth my time.  I was never going to offer a class at our studio that I did not 100% believe in.  Plus there is more.

The fact  is this; ASTANGA Yoga IS the pinnacle, that all vinyasa and power yoga is based on. I AM GOING TO ADMIT IT…I AM A SNOB AND COULD NOT FIND EITHER A GOOD VINAYASA,  POWER YOGA or FUSION YOGA  CLASS IN THE LAST 10 YEARS I LIKED.  (I will tell you one exception, ROAM in Los Angeles lead by Chad Dennis and his wife. That studio is the real deal for a high level of accessible vinysasa by knowledgeable owners. Of course Chad is also a Bikram Certified teacher….)  In addition, even as I travelled to several yoga conferences between 2017-2019, I tried several fusion classes of Original hot yoga (aka Bikram yoga) and vinyasa and I did not like any of them.   I wanted to find one I could get behind, but NONE of them resonated with me and quite honestly felt…like they were forcing the fusion to work, and it didn’t.

Now I feel bad about this and if I am exposing yoga snobbery, I own it and apologize, but it is the truth. The fact is that I also have more Astanga experience than anyone around here, and I if I am going to offer a class, I need to be 100% behind it and believe in it.  I was also very reluctant to open the Pandora’s box of sun salutations as they are not accessible to everyone.  (All the weight on the wrists and shoulders is not an option for some)  But I am ready to open that box and teach both Surya Namaskar A and B (AKA Sun Salutations) as a warm up to your Original Hot Yoga practice and as the start to our new exclusive class at HYP.

So What Changed? Why now?

As things got cold in Nov/Dec, I had a really hard time getting ready to practice original hot yoga.   I was really struggling to make it happen, so one day I decided to do sun salutations first.  I did the Surya Namaskar from my Astanga practice which warmed me up for my OHY practice, and it was a revelation.  I then from memory combined some of the Astanga poses with our hot yoga and started playing with it each day.  I showed it some of my teachers and got input from Brook and Roxanne.  I really sat down and thought of a thoughtful way to create a hybrid of the 2 that had a logical sequence, solved some of the problems of what was missing in each, and provided the power and depth of the Astanga practice, with the brilliant postures in OHY while also keeping the discipline they both offer to create a powerful class effectively done in an hour.

The Big reveal, our newly curated Yoga class at Hot Yoga Pasadena, is called Hotstanga.  It is a set series hybrid of (most of) the OHY poses and some Astanga primary series poses.  I wanted to make sure Hotstanga integrated the power and depth of Astanga yoga with the transformation and healing of OHY.

We are starting the HOTstanga Prep class on Tuesday nights, 5:30 pm in February2021, so everyone can check it out and give it a try.   Val will also record the class and put it in HYP TV for those who want to start practicing it now!  It will be taught in a variation of the Astanga yoga tradition with minimal instruction and lead by the teacher.  This class will be limited to invite by Val for those who have practiced the Hotstanga Prep class and are ready for the next level.  It will be taught when we return to the studio as a practice with the teacher and learn as you go.  You will recognize all the OHY poses and see how I have seamlessly woven it all together.

Astanga purists may be up in arms that I would dare this, and the traditional Bikram yogis may be outraged.  That is ok.  If you don’t like what we do here at HYP, just don’t practice with us.    I will always do what is best for my community, and instead of only having new fitness offerings at HYP, I wanted the chance for a deeper and more powerful yoga experience for those looking for that.   We have some of the most dedicated and experienced teachers you will find anywhere, and I want to expand our offerings with what we are best at, Yoga.

My hope is that after 2020, our local community looks to locally owned businesses before returning to our corporate competition.  I now have a class that I believe millennials will search and love.  I can’t wait to offer this class and I have a light hearted challenge I am sending out to all you millennials…Can you keep up with us??  (Meaning those of us yogis  over 50???).

Start with the Hotstanga prep class Tuesday nights at 5:30 and email me any questions. I can’t wait to share this class with those looking for a more powerful and deeper experience.