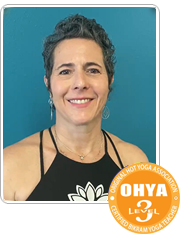 Val Sklar discovered Original Hot Yoga when she was 27 years old after months of discomfort from degenerative arthritis in her right hip joint (caused by a broken hip at the age of 13).

Her Orthopedist told her there was nothing that would improve her condition. His prognosis was joint deterioration until  an inevitable hip replacement within a few years.

Several months later, Val tried her first Original Hot Yoga class.  After six months of regular practice, her joint pain improved as long as she continued to practice. Val was so overwhelmed with the healing power of the yoga that she gave up her corporate career to become a Certified Bikram Yoga teacher. AFter completing Teacher Training in the spring of 1998, She opened Hot Yoga of Pasadena, later that year.

Val is very grateful that Original Hot Yoga and Hot Pilates has kept her physically, mentally and emotionally strong the last 25 years. The yoga was invaluable during two pregnancies and the challenges of caring for two small children. While she outlasted her original prognosis by 10 years, in December of 2010 Val underwent hip replacement surgery. Val returned to her practice a few months later and continues to this day.  She returned to teaching 3 weeks later and practicing 3 months later. You can follow her journey at www.valsnewhip.blogspot.com.

To learn more about Val’s work in the community and her full story and background please visit: https://www.yogival.com/story/ 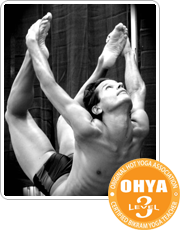 Jeffrey Rangel began practicing Original Hot Yoga in Pasadena in the fall of 2000 while working as a doctoral candidate at the University of Michigan. Intuiting a life change at hand, Jeff jettisoned a career in academia to pursue his growing passion for yoga. upon the recommendation of studio owner val sklar robinson and with the moral and financial support and the Hot Yoga Pasadena community, he became a certified teacher in the spring of 2001. Jeff has taught full time atHot Yoga Pasadena ever since. In the meantime, Jeff has studied extensively with Emmy cleaves, Mary Jarvis and the late Jason Winn. Jeff has taught in studios across California as well as Hawaii and for a stint on Bangkok, Thailand. Jeff has been a regular competitor in the Yoga Asana Championships and is a four-time Southern California Yoga Asana Champion as well as the 2008 USA Mens National Champion. 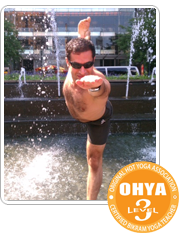 PJ Akbari began practicing Original Hot Yoga in 2007 when he was suffering from back and neck pain due to years of office work, stress, and misalignment. After observing so many physical and psychological benefits, PJ quickly evolved his Yoga practice to a high degree and decided to to become a Original Hot Yoga teacher and share this unique experience with other people who are suffering from various physical and mental discomfort. During day time, he enjoys his other job as a university professor at Cal Poly Pomona. Yoga completes his personal professional life. 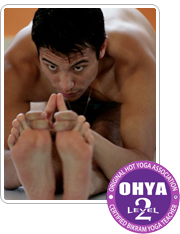 Jesse is a native to the San Gabriel Valley, Graduated from the California School of Culinary Arts Le Cordon Blue in 2004. A strong passion for food and cakes he traveled all over the United States training with some of the best and celebrated chefs in the country, landing him a job as Executive Pastry in Lake Tahoe CA. Long Hours in a hot kitchen and long nights behind a computer was stressful on any person regardless of age; at 23 years of age he felt like a man well into his 50’s, bad knees, bad back, gaining weight, and arthritis in his shoulder that made his passion for creating cakes very challenging and sometimes impossible. It was here in Lake Tahoe that Jesse started doing Original Hot Yoga in 2008. Very Soon after about a month the long hours flew by and the weight just melted like warm butter, the cakes became easier to do and life felt good to be young, Jesse had known he had found the recipe for life. Very shortly Jesse moved back to his home in Rosemead Ca and continued his practice, competed in the 2009 Southern California yoga asana competition, and in 2011 his dreams to become a Certified Bikram Yoga Teacher came true. After spending many years getting people fat and sick from his sinfully delicious and award winning confections; Jesse now enjoys healing people the way the yoga has healed him, breath by breath. 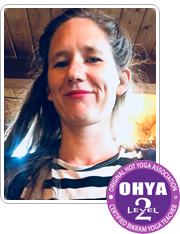 Brook started practicing Bikram Yoga in Berkeley in January of 2007. She attended Bikram’s teacher training in the fall of 2009 in Las Vegas. She has been living, practicing, and teaching in the Los Angeles area ever since. 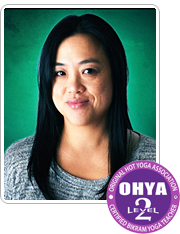 Val invited me to her studio to try Original Hot Yoga over a decade ago, so my first yoga class ever was at Bikram Yoga Pasadena in 2000.  While I liked the workout, I was not hooked. With the demands of traveling for work and twelve hour work days, I gave up my practice a few weeks later without much thought. I was young, single, working, traveling, and living a pretty unhealthy lifestyle; so no time for yoga! It wasn’t until years later after getting married and having a baby that I realized I needed a change. After an unhealthy pregnancy, difficult labor, and later the inability to lose the baby weight, followed by depression, insomnia, etc… I tried the gym and everything I could think of to feel better mentally and physically. Finally in 2006 I forced myself back into that dreaded hot room. Surprisingly that first class back was not so bad. I think I was ready to receive the benefits of the yoga, mentally, physically, and spiritually. I began practicing five days a week and lost the weight in about a month, but more importantly I gained a sense of calm and ease about being a mom and about my life and my future in general.

I continued with a steady practice for about a year and was so inspired and encouraged by the teachers at the studio that I decided to go to Teacher Training in the Fall of 2007.  Teacher training was definitely a life changing experience. When I returned from training  I was pregnant with my second child. I continued to practice and teach until a few weeks before giving birth. I had a stress free easy pregnancy and labor, and a strong healthy yoga baby. I attribute the night and day differences of my pregnancies to the yoga. The most wonderful and inspiring aspect of teaching Original Hot yoga is the idea that in some small way I can be a part of and even witness a student change their life direction and start living their life to their fullest potential. The gift of Original Hot Yoga has done that for me. 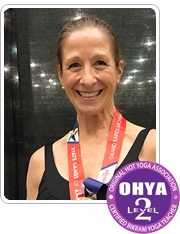 Roxanne took her first Hot Yoga class in 2003, she knew after her first class that one day she wanted to teach the 26 and 2 sequence. Roxanne came from a background and many years in the fitness business, teaching Jazzercise, Personal Training, Fitness and General Manager of local Fitness Clubs. In 2009 she attended  Bikram Yoga Teacher Training in Las Vegas and continues to learn and grow as a practitioner and as a teacher by attending other trainings and workshops. She practices regularly and competes in Yoga Asana Competition, winning California Regionals and placing in the top 4 in Nationals and InterNational Competitions in the last few years in the 50Plus Category. As a teacher Roxanne enjoys helping and watching how the Yoga heals and changes each individual through a regular practice. 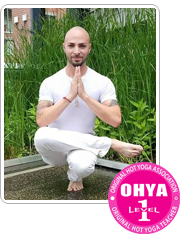 “I’m very happy to be a certified teacher and practitioner of Yoga. I value what Yoga has done for me in reestablishing my path in life; helping me focus on my health as well as the way I think and see the world.”

I always knew I would like yoga. I took my first yoga class in the Summer of 2002 at Mount San Antonio college in Walnut California. After that first day of class I was excited about taking more classes in the future. I saw yoga as a great exercise, and yearned for more; I just didn’t know how to gain this additional knowledge besides taking classes here and there.

A couple of years passed, and my practice slowly began to dwindle. I struggled through hard events in my life, I found myself and losing direction. In December 2011, one thing led to another and I basically hit, “rock bottom”.  Something had to change.

I remember thinking about continuing my yoga practice, since my teachers said it has great health benefits beyond the physical form – and that’s exactly what I did. While living in Pasadena, my friend told me to try hot yoga at Val’s studio and to take Jeff Rangel’s class. Like most of Jeff’s classes, it kicked me into shape and I felt GREAT! From that point on, I haven’t looked back.

With the support and motivation from teachers and friends, I decided In the Spring of 2014 to pursue my first teaching credential. I obtained certification from Satya teacher training and then in the summer of 2016 I also decided to pursue hot yoga teacher certification to teach the 26/2 hot yoga series. I’ve been teaching ever since.

Today, I continue strong in my Yoga practice and plan to expand my education and teaching well into the future.

“Now I can say I have never felt so good drinking so much water. Namaste…” 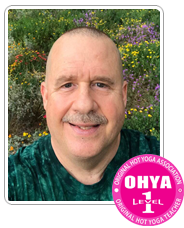 I am a retired Los Angeles Police Officer. I went to my first original hot yoga class 14 years ago to support my wife and daughter as they recovered from injuries suffered in a  car accident. I quickly realized the benefits from this yoga and it became an essential part of my life. Upon retirement, I decided to become a yoga instructor so I could continue to help others. I am a graduate of the Raja Yoga Academy and I truly enjoy providing students with 90 minutes of focus, peace and connection. My hobbies include gardening and spending time with my grandchildren.